Which season had the best animation?

I think Season 6 had the best animation as it looked high quality while at the same time wasn't afraid to go occasionally off model to add to the visual humour. Season 7 and 8's animation was also great but they seemed to take less risks when it came to the characters' movements and general art direction. It's kind of hard to explain but Season 6 just felt like the last hoorah for the original animation style.

But what about you guys?

Edit: You know, now that I think about it further, Season 5 probably has my favourite moments of animation (especially during the first half). So I think it's a tie between 5 and 6. Season 6 is higher quality but season 5 is more fun.
Last edited: Oct 30, 2014

Season 6 for me aswell. The animation looked more high-quality then the other classic seasons but still had that charm.

Season 4 or 5. Both very vibrant seasons with funny animation.
T

Damn it, didn't realize there were multiple poll options.
I think season 2 and 4 was the animation at its best. Really crazy, but also really beautiful.

By then the overall sensibilities of the way the show and its characters looked had been settled on, and they took a lot of risks in terms of unique and beautiful animation (Homer3, The Mysterious Voyage of Homer, Springfield Files, You Only Move Twice etc)

The current one. The colors are vibrant, and the characters are never off-model. For some reason, people want the characters to be off-model and look different from episode to episode. They want the animation to be done worse. It makes no sense.

Anyone got that Marge head tilt gif for Panther?

There's a difference between remaining on-model and being overly-clinical, stiff, and lifeless.


Judge Fudge said:
Anyone got that Marge head tilt gif for Panther?
Click to expand...

The HD title sequence is worse than most of the rest of the HD era, really.

By then the overall sensibilities of the way the show and its characters looked had been settled on, and they took a lot of risks in terms of unique and beautiful animation (Homer3, The Mysterious Voyage of Homer, Springfield Files, You Only Move Twice etc)
Click to expand...

I just want to clarify, I think the animation during season 7 and 8 is great (especially the examples you gave). What I meant by "take less risks" is that we got fewer over-the-top facial expressions and character movements. You don't get many shots like this: 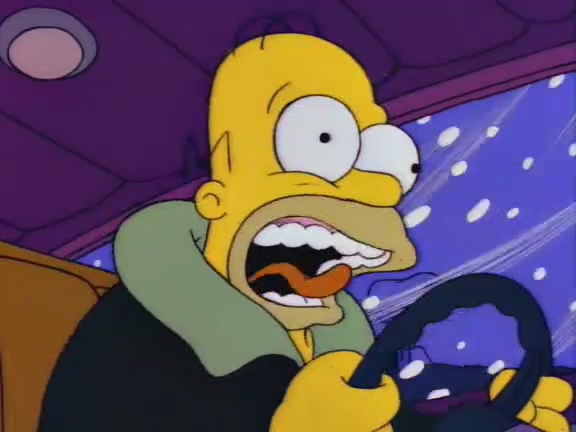 I think seasons 1-3 had some great animation because it was original but it came from Korea so they had to fix it, i thought seasons 7- 8 had a step up in animation, i think the early computer animation of the show had some good animation seasons 13- 19, but i think the best cartoon animations are the ones where there is no fuck ups in which i mean the hd area where everything is done with a computer besides the kitchen window drapes.

it still does come from Korea
D

Bankrupt Panther said:
The current one. The colors are vibrant, and the characters are never off-model. For some reason, people want the characters to be off-model and look different from episode to episode. They want the animation to be done worse. It makes no sense.
Click to expand... 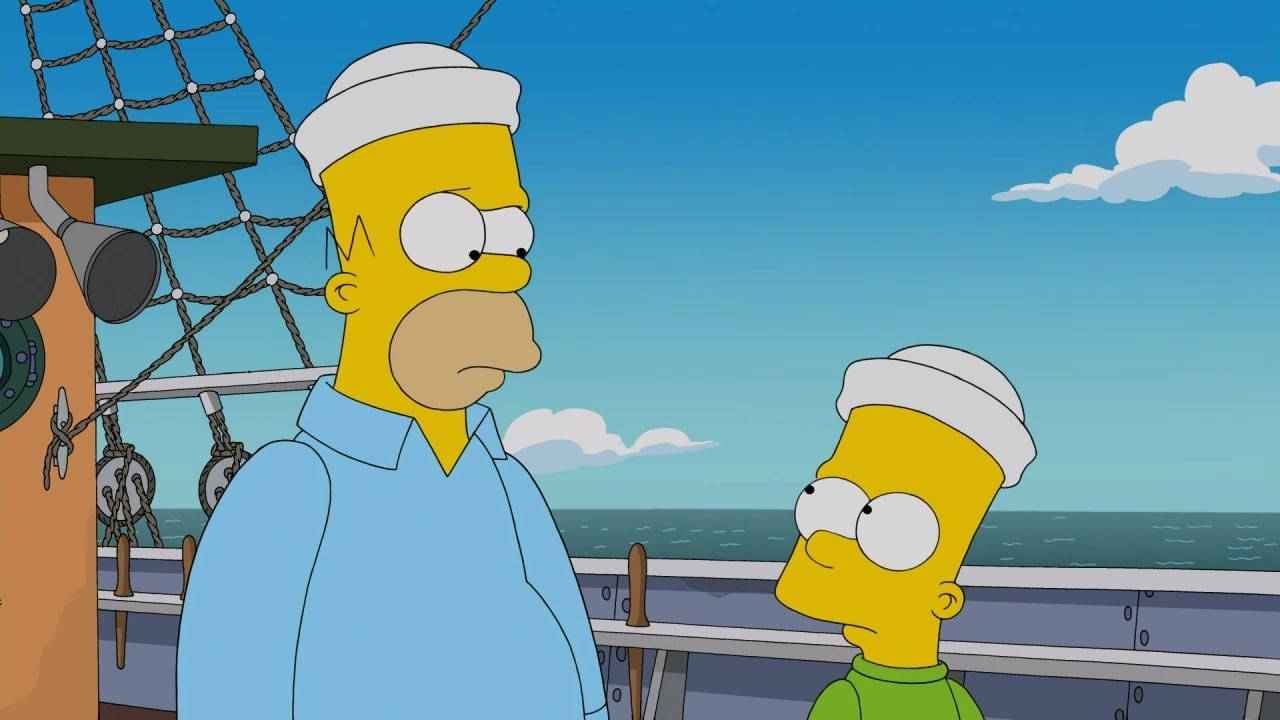 Come on guys, I really didn't want this thread to turn into another discussion about why the HD animation sucks.

Look at this hideous off model art, how dare they give us something worse than usual? I don't want the animators to have fun, how would something be better drawn if they do? I need all the drawings to look exactly the same and rapidly drawn by a Korean, or I might get bored looking at the show after 550 episodes

LukeMassMurderer95 said:
Come on guys, I really didn't want this thread to turn into another discussion about why the HD animation sucks.
Click to expand...

You're right, let's try to steer clear from that in this thread and post well thought out replies on your favorite era of animation.


I was asked the question from this topic in my member interview, so here's my answer:

The Simpsons animation has never been super great or anything. It’s hard to define a favorite era, it's more about moments throughout the series. Overall, the capable directors get some great stuff in most of their episodes, but it’s on rare occasions. The early seasons do feel like they have certain artistry. You see more of the directors experimenting with the style, showing a promise of what they can do. When they’re giving freedom, the animation certainly becomes a lot more interesting. I wish there was more room to artistically grow on the Simpsons.

I adore the Ullman shorts, because they have many ideas in the visuals and animation from the geniuses Silverman, Archer & Kopp. It doesn’t always succeed, but that’s what naturally happens when you try new things. No one has a 100% batting average and that’s ok. A lot of the stuff is at least interesting and inspiring. Animators having fun with experimenting is fun to look at.

Season 2 & 3 have some pretty visuals. I love when they play with colors in dream sequences, the one in Bart vs. Thanksgiving being the best result. They still dare to have some fun, cartoony drawings that IMO don’t take away from the ‘realism’ of the show at all. A lot of experimenting with compositions and camerawork as well.

Season 5 starts off with a bunch of shows that feature interesting animation stuff, but it goes downhill from there on for me.

Location
A Has-Been Planet Orbited by a Cold, Indifferent S

Anyway, probably season 5 or 6. I love season 5's style where the characters have huge round eyes. Particularly in those two seasons the animation style fits the style of the show. Beware for a HD-era comparison coming up, but those slapstick gags that the HD era loves always fail because of ther "on-model clear-colored" animation.

a bland screenshot of two characters isn't the best animation ever?! you must be a detective!
D

Nice try, but the circumstances are completely different. Of course the facial expressions are going to match what's happening.

Although I like the current seasons' colouring, I prefer seasons 4 and 5 for character expression and movement (they couldn't add just a little bit of expression to Marge's face in the HD intro?). With that said, I prefer Seasons 3-13 overall.
Last edited: Mar 2, 2015

I think season 3 had some great animations, but overall 3-6 has my favorite animation. I don't really care much for it, though I appreciatie the work some animators do with some scenes.

LukeMassMurderer95 said:
You don't get many shots like this: 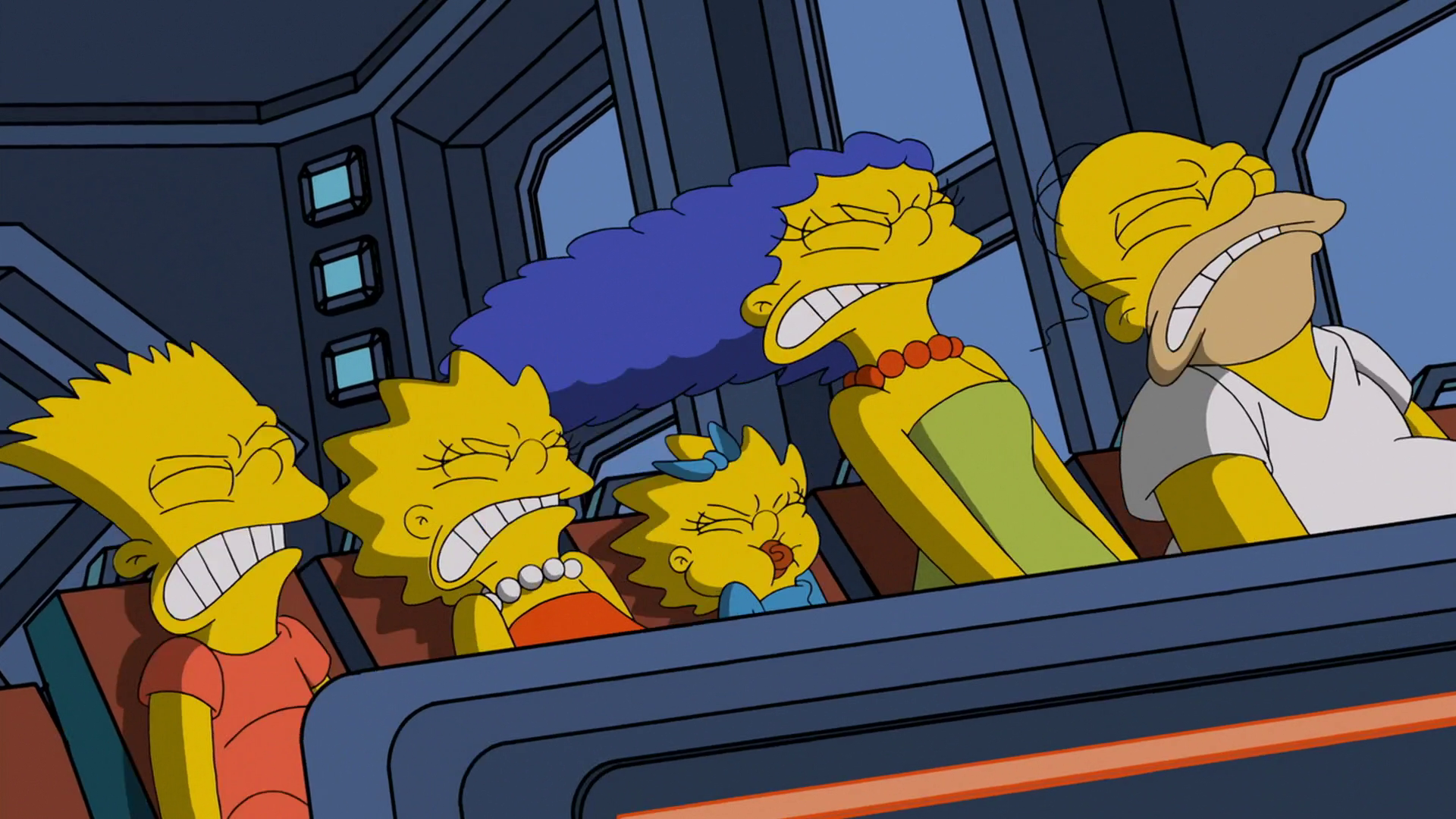 well, there is this.

Looks like David Silverman hasn't completely lost his touch. Still looks flat though when compared to the image of Homer screaming in his car.

Location
Left Of The Dial