UK Politics Thread: You Brexit, you pays for it.

Maybe this is the end of the EU . Next time it's maybe "Sweexit".

I guess I'll be living with my parents longer than I want to after the horrid results of today.

SIDE NOTE: I just finished school forever today and I'm very conflicted as how happy to feel today.

Ah, but that creates an echo chamber.

some scary times lie ahead

Location
Should've got off at Crackton

Johnny Deformed said:
tempted to block my friends on facebook who are going on about this being a great thing
Click to expand...

Thank fuck I'm seeing nothing of the sort on mine. Anyone who's posted about it on my friends list (Myself included) seems to be pretty firmly in the "Fuck this absolute bullshit" camp.

You and me both.

Location
Concrete Jungle Where Dreams Are Made Of

Johnny Deformed said:
so let me get this straight - it'll take two years for the whole process of leaving the eu to happen

so that's two years of uncertainty and not knowing what the fuck is gonna happen next
Click to expand...

Now you know how us yanks feel what with TRUMP 2016 and all that jazz.

if he does though, i dunno maybe it'll be something for the uk and the us to bond over

anyone heard about this? 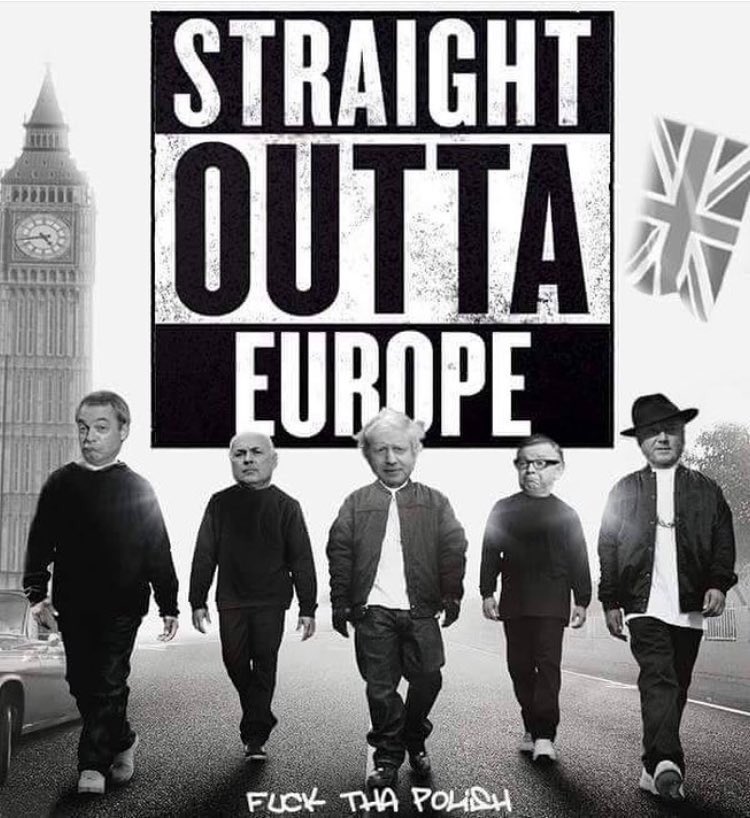 I'm a real user of women

things can only get better right [MENTION=26950]steamed_hamms[/MENTION]
hehehe

you know you're about to die, you've got all the facts, but you choose not to listen to them cause you'd rather not worry about it and just live on like everything is nice and perfect

good thread title though, eh? didn't have an alternative for remain lined up so swings and roundabouts.

If this surprise result should teach you anyway, it's to take your vote seriously - it can make a difference! The amount of people on the news who have said shit like "I wish I had voted" or "I didn't really think we'd actually leave"

EDIT: I just realized I'm talking to people who have voted in many more elections, referendums etc. than I have. Nevertheless, people shouldn't have the mentality of "One vote doesn't make a difference". I'm just glad I took my first ever vote into a democracy seriously

the bear who loves to love

this country is so fucking broken politically it's beyond belief

the failures of successive governments in allowing inequality to escalate and (especially northern) communities to 'fall behind', the failures of european leaders to properly and democratically manage european integration, the lack of proper voting system in this country which has contributed to an increasingly inaccessible political 'elite' which is resistant to political adaptation, the failure to address the constitutional status properly of scotland, northern ireland and england & wales vis-a-vis the uk, the whole fucking globalised economic system as a whole, even the fucking centuries-old fallouts from colonialism and the colonial era... all contributed to this and all will be deeply affected by this. and that's just the beginning.

honestly i'm feeling like once my degree is done i'm moving to scotland and getting the fuck out of here. i can enjoy the fringe with ease every year and participate in politics which isn't openly racist and heart-breakingly hollow. and i don't even mind the rain. sounds good to me
Last edited: Jun 24, 2016

Hole in My Head

Haha, this is really typical of the Baby Boomers and the X Generation. Too doped of Economical Growth I guess.

Hard to argue really, infuriating that this referendum effectively came about as a gamble to tame UKIP/the Tory right.