Location
right behind you aaaaaaahhhh

yeah fuck him for not liking an ok movie

I kinda agree with TheForbiddenDonut and that review in Toonzone. The movie has some brilliant moments and scenes but the message is too similar to the second movie.

I thought LOTSO was kinda more interesting than Stinky Pete, but I think he could have served a nice redemption at the end. There is no reason for him to be THAT bad. The flashback doesn't give him any reason to become this mean. And his past was really too similar to Jessie's.

Spanish Buzz was pretty funny, but I felt like it should have been introduced earlier, so they could have developed Buzz and Jessie's relationship. I was more interested in that than I was in Ken and Barbie. Though I kind of liked how they used Barbie.

I missed Bo Peep, it's not like she wasn't the best character ever but I find her absence a little unnatural.

I agree with the Toonzone review: Woody is a little too devoted to Andy. Yeah, Andy didn't put the toys in the garbage, but he was going to leave them in the attic. Not so cruel but it seems that he wasn't all that interested in them anyway.

The ending was alright but not fantastic.

The animation and character design was brilliant. Loved the monkey, Big Baby and all the dark moments in the film.

Day and Night was brilliant. The ending could have been a little better but I loved the concept and the visuals. I also prefer shorts with more story and characters, but this was a more experimental concept. And it sort of have characters and story, though the characterizations are simply that one is "Day" and the other is "Night". Not a lot of Pixar shorts have complex stories or characters anyway, and certainly very few of them are so visually innovative. Generous 5/5.
V

Saw it, loved it.
Only caught two references to other Pixar movies: the B&L batteries in Buzz, and the toys under the sofa from "Tin Toy". Were there others..... besides the standard "TS" ones (Pizza Planet truck, etc.)?

Also the highest RT and Metacritic rating for any movie in the top 10, and probably top 20.

So, yeah. Big success, enough success that if Pixar wanted to make a fourth one, they could do so. I know Pixar say they only do sequels if they have a good story and they won't make one for the sake of making one but the success of this has to be pretty tempting.

holy shit! I had no idea it had done that well.

I just saw this a few weeks ago, so I don't remember a whole lot. I'm gonna use spoiler tags, just because I don't know how many people have seen it (such as if a guest was viewing the thread and they hadn't seen it or whatever)

This movie was fantastic. I had wanted to see this movie ever since it came out. I finally did and it was a great experience. I was never a huge fan of the first two but I still liked them enough to wanna see this one.
The opening sequence was great. I was disappointed we didn't see some of Andy's toys, especially Bo Peep, but it made the movie feel more... real that way.
The stuff at Sunnyside was great. Woody trying to escape in the bathroom was pretty funny. I liked the twist of Lotso being evil. His backstory (As well as the baby, and Chuckles) was pretty depressing. Not like the most depressing thing ever, but it was still sad. As for humor, the movie had a good deal of it. For some reason I enjoyed the recurring lines about Lotso smelling like strawberries. The way the characters said strawberries was funny, as if strawberries were evil. Spanish Buzz was probably the funniest thing in the movie I think. Like I said, I also liked Woody trying to use the bathroom to escape.

The incinerator scene was great. Well-done. There's a moment when you think they're all going to be burned. I actually think it would have been interesting if one of them had been burned, but I'm not complaining.

Speaking of the incinerator, there are a few things in this movie that surprised me, despite it being a G film. The incinerator is a dark scene, the appearance of that monkey, Chuckles is kinda scary-looking when we first see him. I'm not saying these are terribly bad scenes, I'm just saying it surprises me that this was rated G. I think if I was a kid seeing this, these scenes would have scared me.

And the end. THE END. I knew what was coming (I don't really care about knowing what's going to happen in movies in some cases), but reading about it is a lot different than seeing it. I was sad. Andy giving away the toys and giving mini speeches about who the toy is. I'm surprised he could give Bonnie (cute girl in the movie) Buzz so easily. He obviously loved all the toys. But when we see Woody... that gets me. He is so hesitant to give her Woody, his best pal, and then... sob. He does. Then he plays with all the toys one last time. Then he leaves. I was almost ready to cry during this scene. Just knowing, all these toys, Andy loved when he was younger... and then to see him give them away... the toys are his best friends. It was sad. When this comes out on DVD I'm going to watch this, and the first two, in a single sitting, and I think I'm going to cry at the end. I think the end is going to be the part people remember most out of it (and maybe the incinerator). Overall, it had a lot of laughs, some drama and good emotion, and the ending... wow. Just wow. Fantastic movie, definitely a great trilogy.

Good for Pixar. TS3 easily deserves that spot as #1

Location
On the john

for those getting the Blu-Ray combo pack make sure you use the $8 off coupon from http://toystorycoupon.com

Ugh, looks like I get another average DVD release for a Pixar movie

I'm definitely gonna get that Ultimate Toy Box set. I don't care that I don't have a Blu-Ray player yet, I will someday. I can't pass this set up and feel good about myself.
C

A young Pittsburgh girl was attempting to imitate a scene from Toy Story 3 and ended up in the hospital. Sarah, 4, told reporters, “A kid picked Mr. Potato Head’s eye up and then put it in his nose.” She alleged she found a small battery on the floor of her brother’s room and subsequently stuck it in her nose, noting it “burned and I was crying.” The child, who severely injured her nose, has already undergone two operations and is expected to undergo a third.

Although she was initially transported to St. Clair Hospital, Sarah was eventually transferred to Children’s Hospital for surgery after St. Clair doctors could not remove the battery from her nose. The battery was removed twelve hours later.

According to Sarah’s mother, Kelly Dawso, “It was awful. I had no idea what she had done to her nose…. Evidently, your body, I believe it’s the electrolytes in your body react with the positive and negative charge on the battery and create an electrical current that actually burns the tissue. When the body attacks the battery like that, it starts to erode the battery and releases alkali, which creates the chemical burn… The mucous lining on her septum is burned away, and there are a couple small holes in her septum.”

Dawso urges parents to be cautious of the dangers associated with small batteries, which can be found in toys. “All it takes is one little twist and they’re out,” she added.
P

So I finally saw this just now and god did it exceed all my expectations. Embarrassingly, it's the first movie I've ever actually shed a few tears over. I laughed, I cried, I gawked at the stunning animation. I thought the 'prison break' was genius. I found myself getting misty-eyed in 3 parts: when "You Got a Friend in Me" played at the beginning, for nostalgiac reasons (I watched Toy Story 1 when I was 5!); when the toys accepted their fate and held hands (their love for each other is so real!), and at the end when Andy handed his toys over to Bonnie. It felt like a goodbye to my own childhood as well as his. I say this every year, but Pixar have once again outdone themselves.

whoa, can anyone make that smaller?
P

It's more interesting than the one we're getting in the UK. 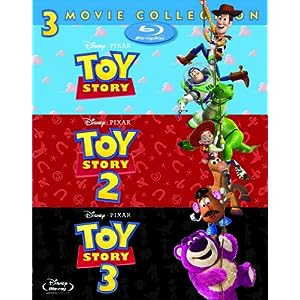 And I wonder why the...
VILLAIN!!!
is so prominent in the TS3 material?

because he's also one of the main characters?

And one of the few new characters who's worthy of being on the cover of anything. Putting Barbie and Ken on it seems kind of silly

why are there so many dang discs

this is some friendly

It seems that it includes a Blu-ray copy, a DVD copy and a digital copy that can be ripped to your computer, so three discs for every film. That's one of the best things about Disney releases in my opinion, buy the Blu-ray version and you always get choice in what format to actually watch.
P

eddie said:
because he's also one of the main characters?
Click to expand...

I guess, I just found it odd that he's included as "one of the gang." You don't see Sid or Zurg or anything.

Should be noted that it's only 5 and a half million dollars away from being the 4th Highest Grossing Film in history (unadjusted for inflation, needs to overtake "Pirates of the Caribbean 2)

Where is it still in theaters?

It's still at the discount theatres, but those hardly bring in a large revenue even for the blockbusters

I pre-ordered the DVD off Amazon in September (the release date was November 2nd) and GOOD GOD it took long to get here. I think it arrived on like the 7th. Amazon never steered me that wrong before, but I digress.

I think I've watched it twice a day for the last three days, I absolutely adore this movie. This trilogy will be in my collection forever.
B

Someday when I have alot of free time (or when I eventually lose my job) I'm totally doing a DVD quadruple feature of The Brave Little Toaster and Toy Story 1, 2, and 3.