The Little Things In Simpsons Animation

that's gonna replace the whale in my nightmares.

people, stop making slightly obscure simpsons references. it makes me feel really crazy when i can remember who said the quote and the episode the quote is from, especially when it has been such a long time since seeing it!

Jesse Pinkman said:
people, stop making slightly obscure simpsons references. it makes me feel really crazy when i can remember who said the quote and the episode the quote is from, especially when it has been such a long time since seeing it!
Click to expand... 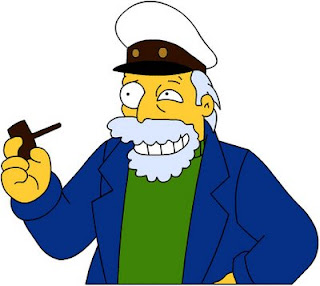 will dance for money

Location
inside of your skeleton, slowly feeding away at yo

This great thread deserves to be bumped.

Skinner: Uh, excuse me, is there an Orange Julius stand on this floor?
Hutz: I'll sell you this one, it's almost full.

But when he drinks it, it makes this slurping noise, suggesting it wasn't actually full as advertised. You can hear it at 5:03 in this video.

We know where most the living room stuff is, but I like the fact they nailed down tons of things through out the house.. no longer random like in the early seasons. Their must be using a cgi model to get all this just right. I always liked the seeing the chicken canisters in the kitchen.. and even stuff in their bedrooms is always where it needs to be, like Marge's atomizer... These pics are collected from unrelated episodes bumping for the cat scratching the sofa while the family watches TV. post more of these little things as you catch em during the marathon please. Some of my favourite little touches come from Bart the Daredevil.

Sherri and Terri stifling laughter and Wendell almost barfing. These characters have no lines, no impact on the story or anything but someone still took the time to think 'if these characters are here, how would they react to this?' rather than just sticking them in as background filler. With most scenes with a extras you don't see unique reactions like that and it's something I wish they did more often. That little extra consideration makes the town feel a bit more alive.

To be fair some of the great modern episodes do this too, just a lot rearer...

The animators getting Moe to cheat at solitaire is an excellent touch, and it’s very Moe-like.

He has a red card on top of another red card: 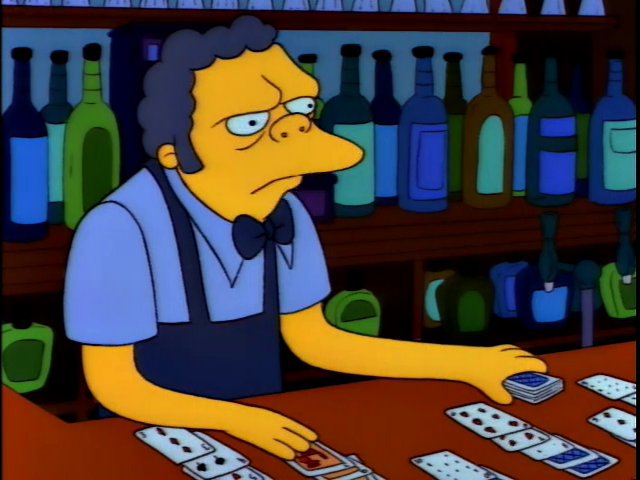 I've always liked this little detail from The Springfield Files. Bart and Lisa having Oreos on sheets of paper towel in front of the TV already feels very authentically kid-like, but I love the additional characterization that Lisa's Oreos are in a neat stack and Bart's are in a messy jumble. hutz is my waifu

not sure why this thread was sporadically bumped but since it was and nohomers is magically back up, im going to use this opportunity to mention the quick one second bit from marge in chains where you can visibly see hutz trying to switch the verdict

It was bumped because I had a scene to post that fit the topic.

It's a good topic and deserves periodic revivals.
Also damn, never noticed the switcheroo. Hutz might have been able to make it as a magician... or a crooked street vendor or something.

I've often noticed that seasons 1-8 (and 9 to a lesser extent) tended to utilize a wider range of camera angles and smaller details to emphasize a gag or atmosphere, which (alongside the greater, almost exaggerated sense of depth in S1-8's animation) provided OFF in its prime with a unique visual aesthetic, as if the crude, stylized designs of the characters were being shot through the lens of a live-action filmmaker's work (as opposed to the majority of the sitcoms the show disparaged, which merely opted for broad, obligatory eye-level shots) - in essence, the show used to take advantage of its animated visuals to amplify the scope and presentation of its comedy in a way that live-action TV sitcoms of the era generally shied away from, which is definitely more than I can claim for the show beyond season 8 or so.

In a way, although it could simply have been a variety of factors (comprised episode production time and Fox clamping down on ‘off-model’ animation, reportedly), this may be related to the departure of both Silverman (who was arguably among the few '90s animation giants who managed to successfully present the technically clumpy aesthetics of '90s animation in an appealing and comedic way, particularly through the use of specific rates and types of motion/visuals to ensure a joke 'read' more effectively - think how Sideshow Bob slamming his face into a rake, technically a simple gag, is enhanced by both the exaggerated shape of Bob's mouth as he groans from the impact and the rate at which his mouth moves/the 'mouth shapes' fluctuate whilst the rest of his body remains inert, which highlights Bob's attempted 'dignity' and renders the show's work in applying a sledgehammer to his ego more satisfying/funny to the audience) and Brad Bird (who, as S1-8's 'executive consultant', basically ensured that the show's 'language' of cinematography remained unique and ambitious to further ensure a consistently pleasing visual aesthetic/that gags were presented in the correct light to illustrate their point more fully)'s departure circa the beginning of season 9 - just compare "The Cartridge Family" (the penultimate episode of both Silverman (until season 13, at least) and Bird) to even the better late-S9 episodes such as "Girly Edition" or "King of the Hill" (in which neither Silverman nor Bird were involved) produced a mere 14-15 episodes later and already the show's presentation of gags has weakened - the camera angles more closely mirror unimaginative sitcom (well, the majority of sitcom) material, the motions (legitimate animation) has become choppier and less meticulous (actions frequently occur overly quickly in a blunt manner without any buildup or integrated subtlety/aspects of characterization, which basically degenerates Homer's increasingly slapstick-prone Scully-era persona into merely a vehicle for cheap cartoon gags), the perspective has flattened significantly and the character designs appear subtly more 'obvious' and constructed (as opposed to the looser and more idiosyncratic designs of previous seasons), all of which basically accentuated as the show devolved into a shell of itself.

On a side note, you could pose the argument that the early Jean seasons (13-15) possessed improved animation quality over the Scully years (due to Silverman's return as an animation producer), the lack of comic timing in these seasons basically negates this alongside the uninspired content of the written episodes in question, an issue which also plagues the more technically fluid scenes of the most recent seasons) to the extent where the former showmanship of the show's prime has now all but evaporated in favor of flat cinematography and an awkward visual 'look'.
Last edited: Oct 28, 2019

This is a good thread that deserved a comeback. I don't have anything that comes to my mind right now but will post when I think of something.

(Also, on an somewhat off-topic note, [MENTION=77782]Captain Wacky[/MENTION], do you think you could utilize paragraphs and sentences with stops if possible? It's hard reading these big blocks of continuous texts and that would help. Just a tip).

These are the little details and small mistakes that made as fall in love with " The Simpsons ". They may have started with a shitty animation style, but they improved over the years and a little more than they should!

Squall Hammer said:
I've always liked this little detail from The Springfield Files. Bart and Lisa having Oreos on sheets of paper towel in front of the TV already feels very authentically kid-like, but I love the additional characterization that Lisa's Oreos are in a neat stack and Bart's are in a messy jumble.

This was the first very scene I thought when I read the name of the thread. And it's also from one of my favorite episodes. I even used a scene from Lisa on Ice as avatar previously.

I noticed that when characters on the show scream, their tongues usually wiggle like crazy...

But an exception was Bart's scream in "Treehouse of Horror II," when he wakes up after Homer kisses him in his dream... 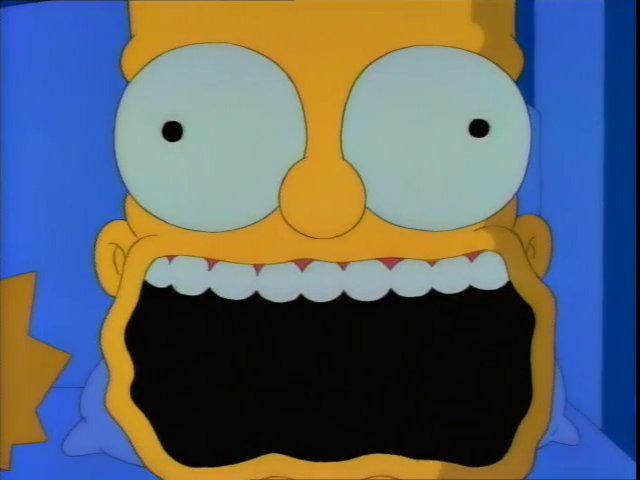 His tongue disappears as he starts screaming, making it look kind of freaky (and the zoom into his pitch black mouth doesn't help.) I actually modified that bit in Final Cut Pro, keying in Bart's tongue looped and cropped from his post-nightmare scream in "Treehouse of Horror VI" (with that weird wide-angle shot where his tongue DOES wiggle), making it look more natural for the series...

In Burns heir, Bart runs away and rides his bike to Burns mansion. When Homer tries to get Bart to come home, he runs over the bike, mangling it. I'm sorry I don't have a gif but I always thought that was a funny quick gag.

wiley207 said:
I noticed that when characters on the show scream, their tongues usually wiggle like crazy...
Click to expand...

Speaking about this, I really liked it how not only the tongues fluttered but the lips quivered and wriggled. It was a funny detail but they seemingly dropped the latter after the first three-four seasons (and if I'm not mistaken, they still do the tongue flutter on the show occasionally, but maybe they dropped that too a while back).

I’ll give credit to Mike Amato of Me Blog Write Good for seeing this: Bart misses the chalk when he tries to grab it without looking, and when he writes the 9, the chalk slides down. It’s a nice touch.

When stopping this scene in Homer The Smithers, Moe's eyes look like they're glitching or something: