Status
Not open for further replies.

starting today, november 13th, 2010, nohomers.net is no longer a simpsons message board with an enormous off topic community. we are now a community devoted to pop culture & off topic discussion that also talks about the simpsons, among other shows.

nine years ago, the NHC was 65% simpsons discussion and 35% off topic discussion. that number jumped to 50%/50% five years ago. currently the clear majority of our membership come here regularly to discuss other subjects. the simpsons is an amazing show we will always remember fondly, watch re-runs of, and quote routinely, but (with the exception of 2007 when the simpsons movie was released) its popularity has continued to gradually & steadily wane over the past decade. as for declining quality, well that's an argument for another thread.

although our original intention was to keep the NHC simpsons-focused until the end of the show, with the recent renewal of the series through its record 23rd season, it is obvious that fox will air new simpsons episodes until the day comes when the producers finally tell the network "no más."

however, unlike the simpsons, this website's community is here for the long haul. the NHC cannot continue to grow if its discussion stays tethered to a series whose most popular days were ten years ago. thus, over the past month we've expanded the forums to discuss a much wider variety of topics. today, we've condensed the simpsons section to a single forum with several sub-forums (all of non-GD forums have been moved into the simpsons forums). please note that we have no intention whatsoever of eliminating the simpsons discussion in the future and that we are proud to have such a fantastic archive of simpsons topics as well as having been the largest forum devoted to OFF since 2001. our archive of simpsons posts will remain on the forum until the end of time, or when we accidentally spill beer on our servers again. everyone is still very welcome to discuss the show here on a routine basis and we hope you all continue to do so.


that said, if you haven't been here in awhile, we've added quite a bit to nohomers since october. we now have separate forums for animation, live-action tv, film, music, books & comics, and news & politics as well as a blog feature for anyone. we may add one additional forum in the near future but i'll talk that over with the staff first.

our homepage has been slightly re-done to reflect our entertainment/OT focus: http://www.nohomers.net

we now have separate forum homepages for forum categories, including music, video games, and tv:

also, our simpsons page has moved to http://www.nohomers.net/pages/simpsons/.

within the next few weeks, we'll add forum homepages for general animation, film, books & comics, news & politics, sports, and futurama. i'll soon add links to all of these pages in the forum navigation bar above.

finally, keep in mind that we will remain at nohomers.net/nohomers.com. the nohomers domain name should and will appeal to anyone who was at least a casual fan of one of the greatest pop culture subjects of the 1990s and 2000s, and is a perfect, fitting name for a website devoted to popular culture, entertainment, and other subjects.

i'm well aware that while many of you will be delighted to hear all this news and no longer be kinda embarassed to regularly surf a simpsons off topic board, a good number of members here will also be upset. sorry, this decision was not made lightly but the vast majority of our staff has backed the change. bring on the thumbs ups and thumbs down to this thread, because there will be no going back.

the last major change for nohomers in 2010 will likely be the move to our new server, which will be a scary transition but we'll get it done. our new server boxes were purchased today. we'll also get the somewhat broken search repaired by the time the NHC moves to its new home.

ALL GLORY TO ZEUS THE HYPNOTOAD

EDIT: to clear up some things, the way the board looks now is not what it'll look like in the future. what you're seeing now is essentially phase one of a transition period here. eventually the discussion here will be more balanced, but these changes have to be done gradually and not instantly. please have patience with us.

welcome to my town

Thanks to anyone and everyone that made it possible to get new servers. This place is really going to rock even more!
K

Great job on everything, guys, really. The amount of ass you kick is immeasurable. :bow:

Looking forward to a bigger and better board for the foreseeable future!
P

Thanks for all the hard work, I support these changes.

One question though, are threads for individual episodes welcome in the animation forum again, or would it be preferred for things to mainly be kept to one thread?

Postmaster said:
Thanks for all the hard work, I support these changes.

A question; Are threads for individual episodes welcome in the animation forum again, or would it be preferred for things to mainly be kept to one thread?
Click to expand...


check out the forum description

oh nice changes. when I saw the message an hour ago (or whatever) I thought to myself 'he's getting rid of the simpsons section!' close enough.

to the new era

Oh boy! You mean a whole board devoted to general animation? The discovery of a life time!


Elsewhere in the board: It sucks that Simpsons is dead (pretty much) I mean, I'm not saying it's not warranted, but it's kind of weird. And I haven't even watched Simpsons much in the past decade. Reminds me of my first internet message board. The focus shifted from a specific program, to a general discussion of every program in the genre. Felt weird man. In fact, I think it's partially why I left back then.

Finally! I can make fun of the Simpsons post-season 9 without fear of ridicule, persecution and/or censorship!


where is the ANIMATION Thread?

I don't think that The Simpsons is losing popularity, actually, and I think it has more fans than this board represents, but I'm okay with making it less of a focus because it's still there and we can still talk about it.
Last edited: Nov 13, 2010

yeah the simpsons has been as great as it's always been. you crazy eric

I love this new idea. Bravo!

D'ohmer said:
I don't think that The Simpsons is losing popularity, actually, but I'm okay with making it less of a focus because it's still there and we can still talk about it.
Click to expand...

How can you think its still as popular as ever? In its' heyday, it was THE show. Everyone talked about it. Everyone quoted it. Ask around today - most people don't watch it, or if they do they're just casual viewers who catch an episode if they're bored. Many people, if you bring it up, will even react with disgust and say how they prefer Family Guy.


yeah, that was a pretty shitty history joke
D

NoOneFamous said:
I love this new idea. Bravo!How can you think its still as popular as ever? In its' heyday, it was THE show. Everyone talked about it. Everyone quoted it. Ask around today - most people don't watch it, or if they do they're just casual viewers who catch an episode if they're bored. Many people, if you bring it up, will even react with disgust and say how they prefer Family Guy.
Click to expand...


Actually, that's not true. I still hear much about The Simpsons and while I don't remember much from 10 years ago, The Simpsons isn't "out" and no one should be embarassed for being a fan of it. Some people prefer Family Guy, but many people still watch and prefer The Simpsons. In fact, I haven't heard many kids at school talk about Family Guy for a long time.
R

So this is only an aesthetic change, right? Instead of a the Simpsons forums under a header on the main board page, it's just the same forums as subforums in the Simpsons forum? No different view of the kinds of threads and posts that can be made?

I'm totally embarassed. I have to quickly add "butonlythefirsttenyears" every time I admit to it

the change was necessary

Location
Running through your mind

Mt. Doom said:
I'm totally embarassed. I have to quickly add "butonlythefirsttenyears" every time I admit to it 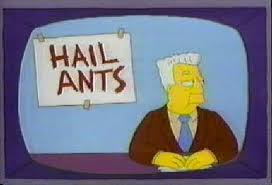 I for one welcome our new off topic insect overlords.*

*(See what I did there? I made a reference to The Simpsons from when it was still remotely funny and/or culturally relevant.)


Seriously, I'm liking this change. The off topic stuff was why I came back.

The cockroach of No Homers.

Location
Does it matter? I'll just put a joke here.

I'm so stupid that I'm going to check out the changes.

Crap. Now we actually have to make worthwhile posts in the Video Games forum.

Nice changes. Now the only thing left is ditching Zeus.

Location
Look Around You

I dig this move. I always kind of considered this place an off topic forum with some Simpsons sections on it, anyway so it's not a huge deal for me. This is seriously one of the coolest forums I've ever posted on, so I'm happy just to be here.
P

so who wants to update our wikipedia page?

this has seemed like the obvious move for a while now, but seeing such high support really illustrates how it was a good idea to wait until virtually everyone would be on board
G

Location
Look Around You

THIS IS AN OUTRAGE

What if The Simpsons suddenly has another surge of popularity (like it did about three years ago)?

Status
Not open for further replies.