In "Attack of the50 ft Eyesores", when Lisa goes to the Van Brunt and Churchill office, why does the guy have books under all the legs of his desk? It's a deliberate choice, but I don't get why

Looking at the table, it could be that's it's wobbly, as only 3 of the 4 legs have books on them. However, my head Canon thinks that the 4th book magically appeared when he got up to the piano, he decided that he might've well caused a mess on the table, without the animators knowing (this is an animation mistake)
J

Yeah, but why? What's the joke?

I think it's just a small indication that business has dwindled since their 50s heyday so they have to resort to low-class solutions like propping up the desk with books instead of repairing or replacing it. They also appear to have a rat problem, and trash is piling up
W

I don't get the joke in the scene where the farmer feeds a gopher (?) to the elephant. What am I missing here?
A

In the Halloween segment "Freaks, No Geeks" there was a sideshow character billed as "Man or Maid" - was this based on a regular character? If so, I don't recognize them.

He looks like Skinner, but he's not based of him, so I think he was just a one-timer.
W

Cool. Thanks for the quick reply!

orangemo said:
I’m glad Matt Selman will be the new showrunner for The Simpsons
Click to expand...

Thanks for quick reply.
S

I'm looking for an episode where Moe (as I recall it) sings what must be a tune from the mid to late 1940's that mentions a bunch of Japanese places which I suppose where locations of important WW2 battles. Or perhaps places where US servicemen were stationed after the war had ended. It goes something like "Yokohama, Nagasaki ... " and so on.
W

Was there a couch gag where the couch escapes from the family and flies off on an airplane?

Season 27 episode 13 (valentine's Day episode).
There were scenes, where the couch flies to somewhere to Middle East.
W

That's the one. Thanks, Bohdan!

I remember there was an episode where Lisa gets her head stuck head first, can anybody tell me what this episode's name supposed to be?

[MENTION=89435]HowdyNeighbor[/MENTION] If you're referring to when she made a face at Bart and her face got stuck that way, you're thinking of Bart's Not Dead. 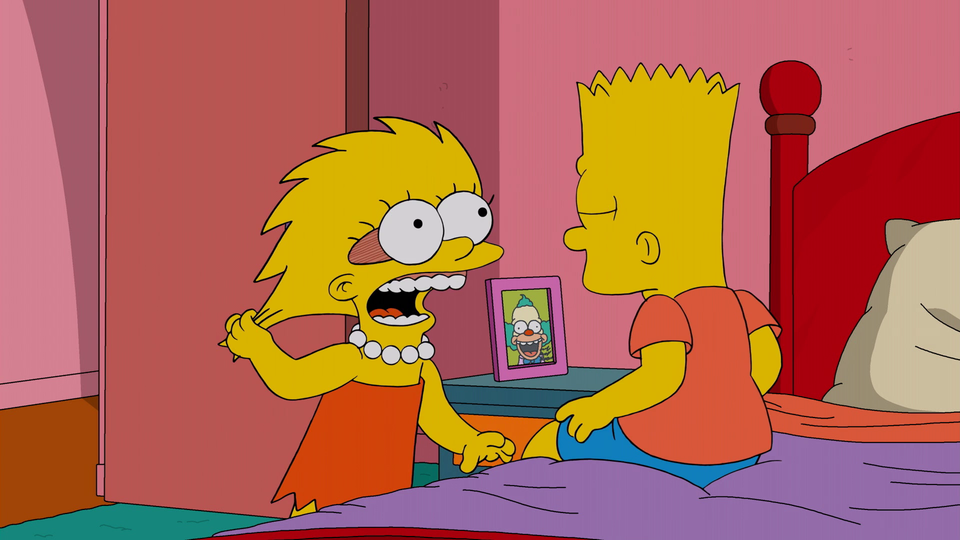 Brad Lascelle said:
[MENTION=89435]HowdyNeighbor[/MENTION] If you're referring to when she made a face at Bart and her face got stuck that way, you're thinking of Bart's Not Dead.

I remember her head stuck on something, like you can't see her head, only her body. I want to know what's the episode's name supposed to be, as it was a very funny episode for me.

[MENTION=89435]HowdyNeighbor[/MENTION] What your describing did happen during the opening couch gag of Treehouse of Horror IX? Is this what you're thinking of by chance?

Brad Lascelle said:
[MENTION=89435]HowdyNeighbor[/MENTION] What your describing did happen during the opening couch gag of Treehouse of Horror IX? Is this what you're thinking of by chance?

Yes! But I remember there was another scene where she had her head stuck in something, is there an episode where Lisa gets her head stuck or is it supposed to be Marge?
L

What words can they not say? They've said hell damn bitch ass countless times, and Homer {and some other people} have said "fuck" before, though it is of course censored. Would they be allowed to say slut, the W {you know it, i dislike swearing though}, the C word... would they ever be allowed that? Mostly slut and the C word, because whore has actually been used.
Click to expand...

Hello. I have been trying to find an episode that Eddie and some other guys from the police are taking bribes, or something similar. I am pretty sure it is one of the earlier seasons.
In the episode, we see them riding around, busting people, getting free stuff from stores, and maby even collecting weed.

At the very end of the episode, we see the police has taken over a house, playing poker etc. And more cops keep showing up, parking outside, and they are gonna have a good time.
I have been searching for The Simpsons Police taking bribes, but i have only found a general article that sums up Chief Wiggums history with bribes.
I found the episode Marge joins the police, and fight corruption. In that episode, Homer has gatherings at his home playing poker.
But it was not that episode. ( The Springfield Connection)
If anyone has seen something similar and maby knows what i am looking for, i am happy for a reply.
Thanks.

The ending looks right. Thank you Dark Homer. It looks like i have mixed up two different episodes. I will see if i can figure out which episode the other parts is from.
T

My first post and primary reason to make this profile, although I have been lurking for some years.

So I'd want to ask, what episode was it, that has someone asking Homer, hadn't he had ones tried to play a dog's tail like a musical instrument.
It was a newer episode, and I think I can misremember some detail, but anyway it was about Homer having had tried to play an animal's tail like an instrument. It's a bit difficult to google that quete.

I don't know what episode is that, the only 2 I can think of is Homer Goes To College (where he makes Sir Oinks-A-Lot oink when he pulls his tail) and in Sweets And Sour Marge (where Homer plays a guitar with a snake)
T

To be precise, it was only mentioned that Homer had tried that.
Hope I don't mix it up with some other show, but dunno, what it could have been. The problem is, I saw that episode like half a year ago on tv, where it's always showing reruns.
You must log in or register to reply here.
Share:
Facebook Twitter Reddit Pinterest Tumblr WhatsApp Email Share Link
Top